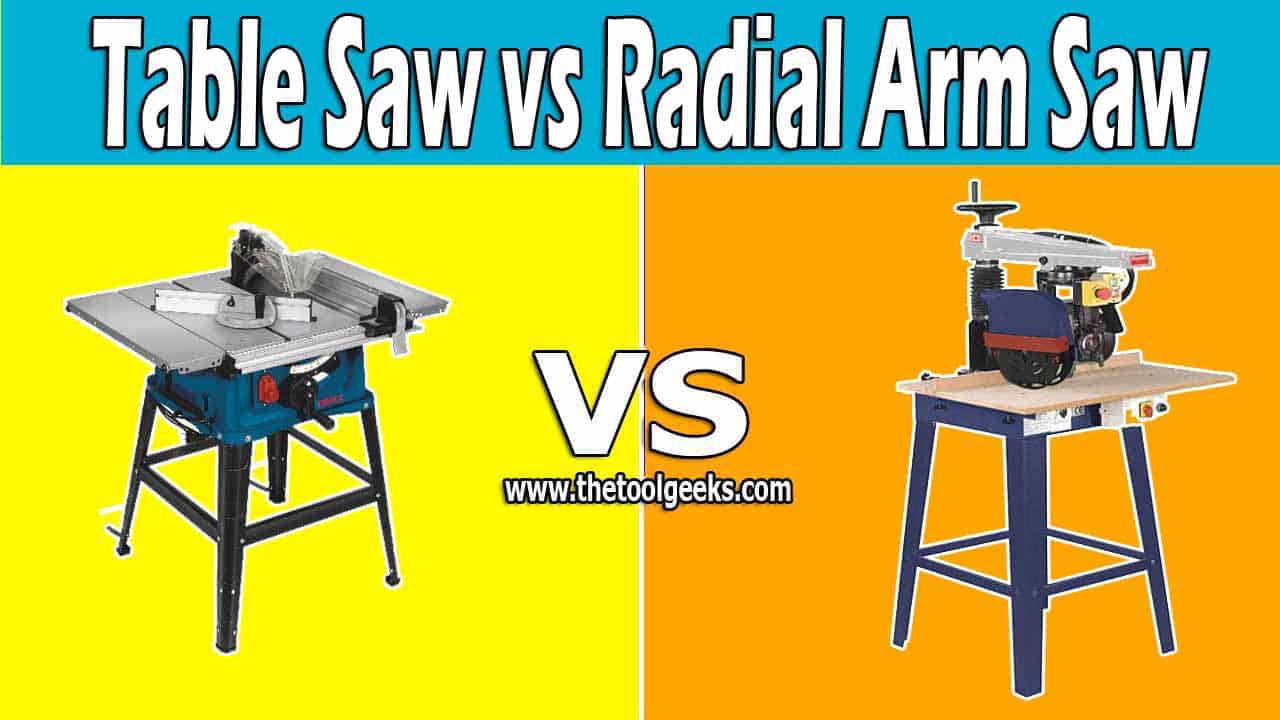 The world of woodworking and carpentry is riddled with different types of power saws. We have tabletop saws, handheld saws, large power saws, small power saws, and so on.

In this world riddled with several power saws, the larger power saws dominate and when we talk about large power saws, there is not often any larger than the table saw and the radial arm saw.

The table saw and the radial arm saw are large power saws packed with several features that make it possible to make numerous cuts with ease. Both saws are powerful, versatile, and accurate. However, there is a slight disadvantage with both saws.

Both saws require a good deal of space to be used and they are also high-priced. So which of these power saws should you buy? Well, that answer depends on several factors.

Luckily, this post will introduce you to and explain all you need to know about table saw vs radial arm saw as well as tips to help you figure out which of the two you will need for your task. So let’s get on with it. First, let’s take a look at table saws.

What Is a Table Saw and What Is It Used for?

Table saws are large and powerful saws. The table saw is capable of making several types of cuts with a good deal of accuracy. Table saws are very common in every professional woodworking workshop.

The table saw’s power also makes it a very good choice for construction workers so you may have seen this power saw on a job site before or maybe you have even used one. 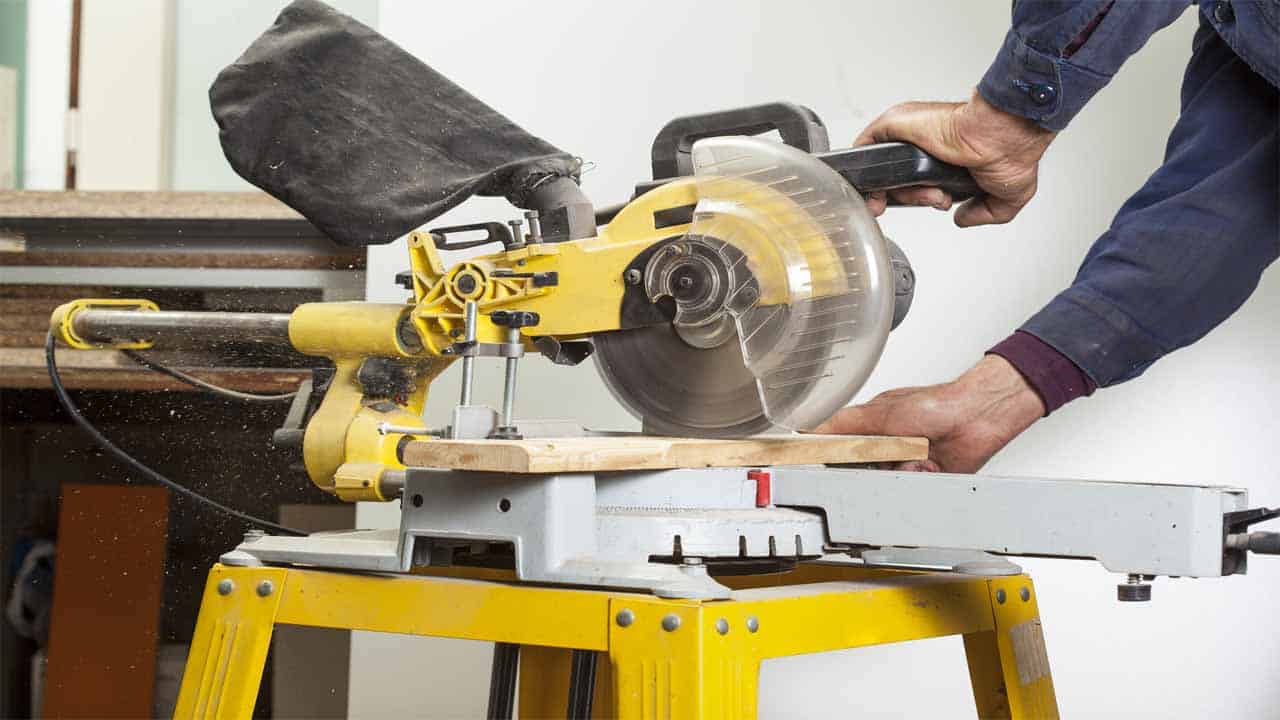 Table saws use a thick circular blade to make cuts. The blade of a table saw is usually packed with teeth and can be made from different materials like carbide. Like most other power saws, table saws also have different types of blades.

Each blade has its unique thickness, size, and number of teeth. The thicker and bigger table saw blades usually have fewer teeth and such blades are used for rough cutting like re-sawing and for cutting multiple logs at once.

The material to be cut is usually fed into the path of the blade which can spin as fast as 4000 RPM. The blade is powered by a motor and the blade can also be adjusted by using a knob or lever usually located beside the saw. The knob is called the blade adjustment knob and it can be used to adjust the blade’s cutting depth.

Table saws are used for re-sawing, cutting large stock, making straight and square cuts, and making some intricate cuts. The main strength of the table saw is its power. Now let’s check out radial arm saws.

What Is a Radial Arm Saw and What Is It Used for?

Radial arm saws are not exactly the most common power saw you will come across. You will most likely find radial arm saws in only a handful of carpenters’ workshops. This doesn’t however mean that the power saw isn’t good enough or is second-tier. 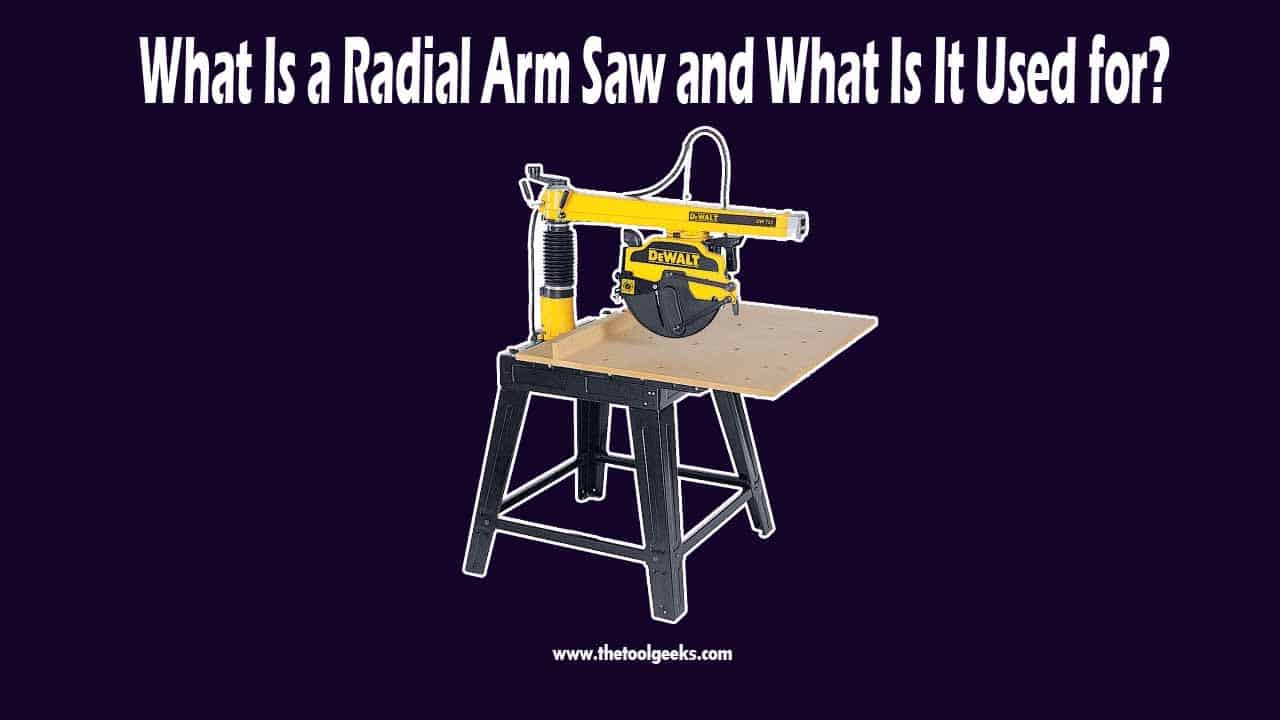 This prevents the wood from vibrating or moving out of the path of the blade. Radial arm saws can cut wooden stock in both directions and that’s not all.

Radial arm saws can also be used for more than just cutting wooden stock. The saw can be used to sand and it can also be used as a router as long as the right components are attached to the power saw.

Radial arm saws are used to make cross cuts, angled cuts, and can also be used to rip boards. The blade of a radial arm saw is usually mounted on a moveable arm.

This arm can be moved in different directions. This makes it easier to cut large wooden stock because you just have to lower the blade and cut through the stock. This is different from table saws where you have to feed the wood into the path of the blade.

So is the table saw better than the radial arm saw or is it the other way around? Let’s find out.

The table saw and the radial arm saw are both great power saws. They can both make several cuts with a good deal of accuracy and they both have their advantages and disadvantages.

However, if you are looking to buy one, it’s always a good idea to know where each saw stands when compared to the other. So let’s do a vivid comparison using both saws’ features.

The speed of a power saw is very important as it determines how fast the blade spins and how quickly you can complete your cut. The table saw and the radial arm saw are both fast power saws but which is faster?

In terms of speed, the table saw is faster than the radial arm saw. The increased speed of the table saw is due to its powerful motor. Table saws are usually designed with a 15 amp motor that is capable of spinning the blade as fast as 4000 RPM (revolutions per minute) and that is not even the fastest speed of a table saw. Most job-site table saws have a speed of over 5500 RPM.

Radial arm saws on the other hand are not as fast as table saws. At best, a radial arm saw will generate a speed of about 3000 RPM. Though that is fast, it’s nothing compared to the speed of a table saw. So if you are looking for a saw with increased speed, the table saw is your best pick. Let’s check out another feature.

Both saws use a circular blade to make cuts. The difference is in terms of where the blade is located and how the cut is made.

For table saws, the circular blade is designed inside the saw. The blade of a table saw is mounted on an arbor and powered by a motor. The blade protrudes through a small opening on the tabletop. The wooden board or log to be cut is usually fed into the path of the spinning blade. The blade depth can also be adjusted by using a knob usually located on the side of the table saw.

Also, the blade of a radial arm saw can be positioned in different directions and this makes it easier to make cuts. All you have to do is secure the wooden stock with a vise clamp or any other alternative and then lower the blade in the needed direction.

This is different from table saws that have a stationary blade. The blade cannot be moved. The only thing you can do is just to adjust the blade’s cutting depth or its height. This makes it difficult to make some cuts with the table saw.

The level of accuracy of the power saw determines how straight and precise the cuts made will be.

When it comes to accuracy, table saws are more accurate than radial arm saws. Table saws are designed with tons of features like the fence that makes it very easy to achieve accurate cuts.

The fact that the blade is also stationary prevents any sort of wobble that can affect the straightness of the cut made. Table saws are often used for precision cutting. If you want to make a piece of furniture or you want to cut wood for joinery, a table saw is the best bet.

Table saws also offer minimal vibration since the blade is fixed in place. As long as you used the right blade and you move the wooden stock correctly into the path of the blade, you will arrive at a very precise cut.

Radial arm saws are not exactly built for precision or accuracy. The motor of the radial arm saw is visible and is placed above the table together with the blade. The noise and vibration of the motor affect the accuracy of the cuts made by the radial arm saw.

Though the radial arm saw to some extent is also accurate, the level of accuracy cannot be compared to that of the table saw. While table saws will give you a neat and straight cut, you will notice some sort of wobble when you cut with a radial arm saw.

Related Read — How to Make Angled Cuts With a Table Saw

In terms of size and weight, table saws usually weigh more and are bigger than a radial arm saw. Table saws often need a large floor space to be used. The tabletop of the table saw alone is usually wider than most radial arm saws. This is why you often see table saws in the center of a workshop with other power tools sitting around the saw.

Radial arm saws on the other hand are not so big. Radial arm saws can even sit in the corner of your workshop and the power saw will work just fine. The saw doesn’t require as much floor space as table saws.

In terms of weight, there is no specific weight for either power saws. The weight of the saw depends on the brand and type you get. While some table saws can weigh as low as 50 pounds, others can weigh well over 200 pounds. The same goes for radial arm saws. Though the weight depends on the type and brand of the power saw, table saws usually weigh more than radial arm saws.

Table saws are safer to use than radial arm saws. Table saws are packed with different features like the blade guard to cover the blade when not in use, anti-kickback pawls to prevent injuries to the user, a fence, and a riving knife amongst others. All of these components make the table saw safer to use.

Radial arm saws are not exactly safe. For starters, the blade is usually exposed either while cutting or after. This increases the risk of injuries.

In terms of versatility, radial arm saws win by knockout. Not only can the radial arm saw make several types of cuts, but it can also take on different types of tasks asides from cutting. Radial arm saws can be used as a router and a sander when attached with the right components.

The Ease of Operation

Table saws are easier to operate than radial arm saws. Table saws have different components that make it easier to use the power saw to make cuts.

Radial arm saws on the other hand are more difficult to operate which is why you only find them in the hands of experienced professionals. The difficulty in operating a radial arm saw is why many woodworkers prefer to buy a miter saw which for the record is also easier to use than a radial arm saw.

Should You Buy the Table Saw or the Radial Arm Saw?

It all comes down to this question. Which of the two power saws should you get? The answer to that question depends on the type of task you want to complete with the saw. Cost doesn’t matter here because there isn’t much difference in the prices of both saws.

If you need to make precise cuts or you want to rip boards, a table saw is your best pick. Radial arm saws are more suited to rough work or cuts that don’t need accuracy. In terms of the size of the task, table saws can handle large-scale tasks better than radial arm saws.