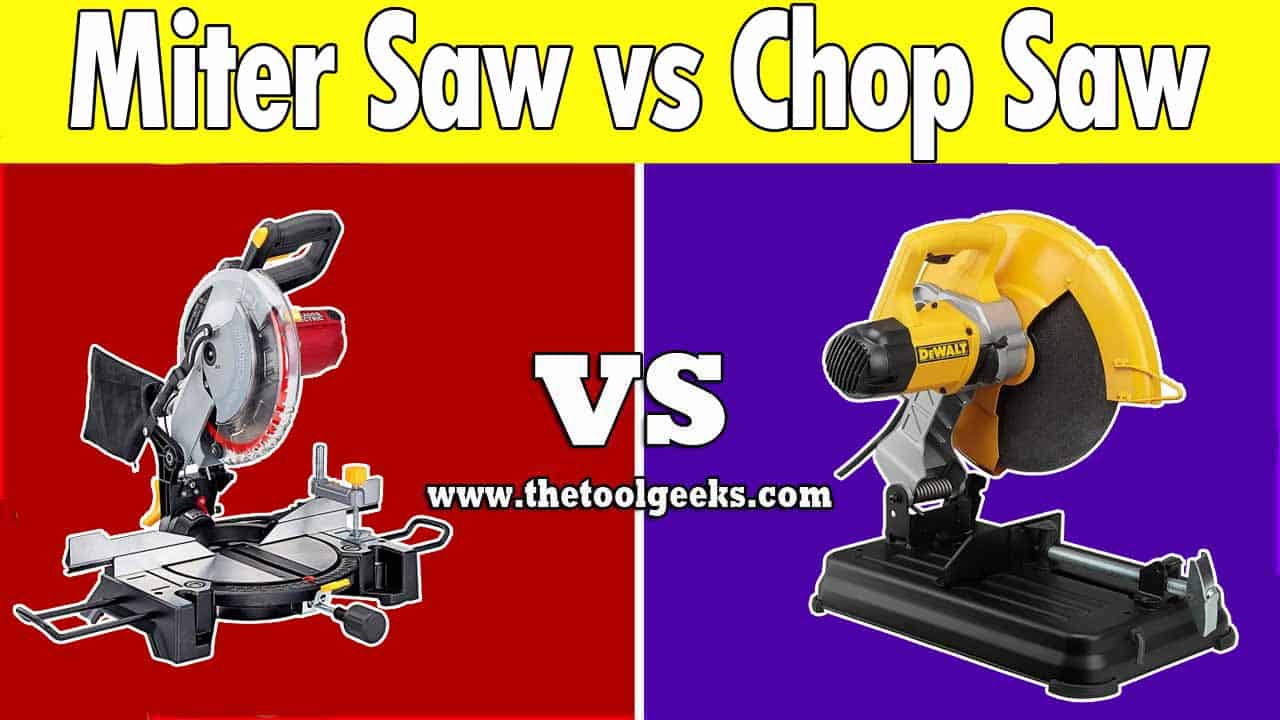 The world of woodwork is packed with different power tools. Some are very different from the others while some are alike based on their similar function and, or build.

Two similar power tools you might come across are the Miter saw and the Chop saw. Based on their appearances, both power tools look alike.

They are both tabletop saws. They both have circular blades mounted on a pivoting arm and they both cut vertically with the blade lowered on the material to be cut. So, what then is the difference between a miter saw vs chop saw?

Well, the simple answer is that a miter saw is smaller than the chop saw and it is capable of making intricate cuts. The chop saw on the other hand is limited to 90-degrees angled cuts due to the larger size of its blade. But that’s not all.

What are both tools used for? And which of the power tools should you get? There is a lot of uncertainty surrounding both power tools.

This post will highlight and explain all you need to know about Chop saws and Miter saws as well as some expert tips to figure out which of the power tools you will need for your task. So let’s get on with it.

What Is a Miter Saw and What Is It Used for?

A miter saw is a type of table saw that can be positioned at different angles to make complicated cuts on materials. The miter saw has a circular blade that is placed on a pivoting arm.

The blade of the miter saw is lowered on the material which is usually held firmly by a vise clamp or through some other method. 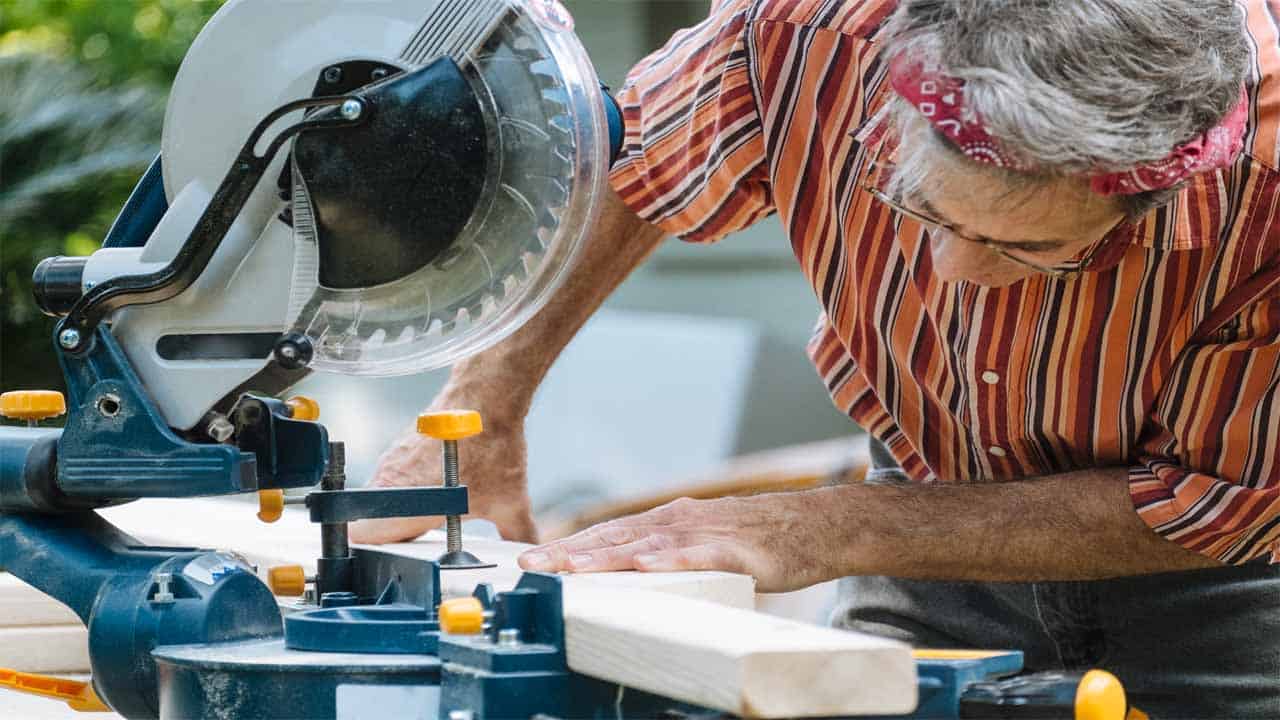 The special feature of the miter saw is that the power tool can make bevel, compound, straight, and miter cuts almost in any direction. The power tool gives versatility a whole new meaning.

Miter saws are a popular choice among carpenters, especially those that deal with detail work like making window trims, baseboards, door frames, and the likes.

The precision and versatility of the power tool make it a top choice for woodworkers. You can make virtually any type of cut on a miter saw rather than moving the material from one power tool at the end of your workshop to the other.

What Is a Chop Saw and What Is It Used for?

A chop saw is also a type of tabletop saw. The power tool has a large blade that is capable of cutting big and thick materials. It also has its circular blade placed on a pivoting arm.

The blade is usually lowered on the material to be cut vertically from top to bottom. Though similar in terms of build to the miter saw, the chop saw cannot be tilted to the right or left. It is a stationary power tool that only makes 90-degree straight cuts. 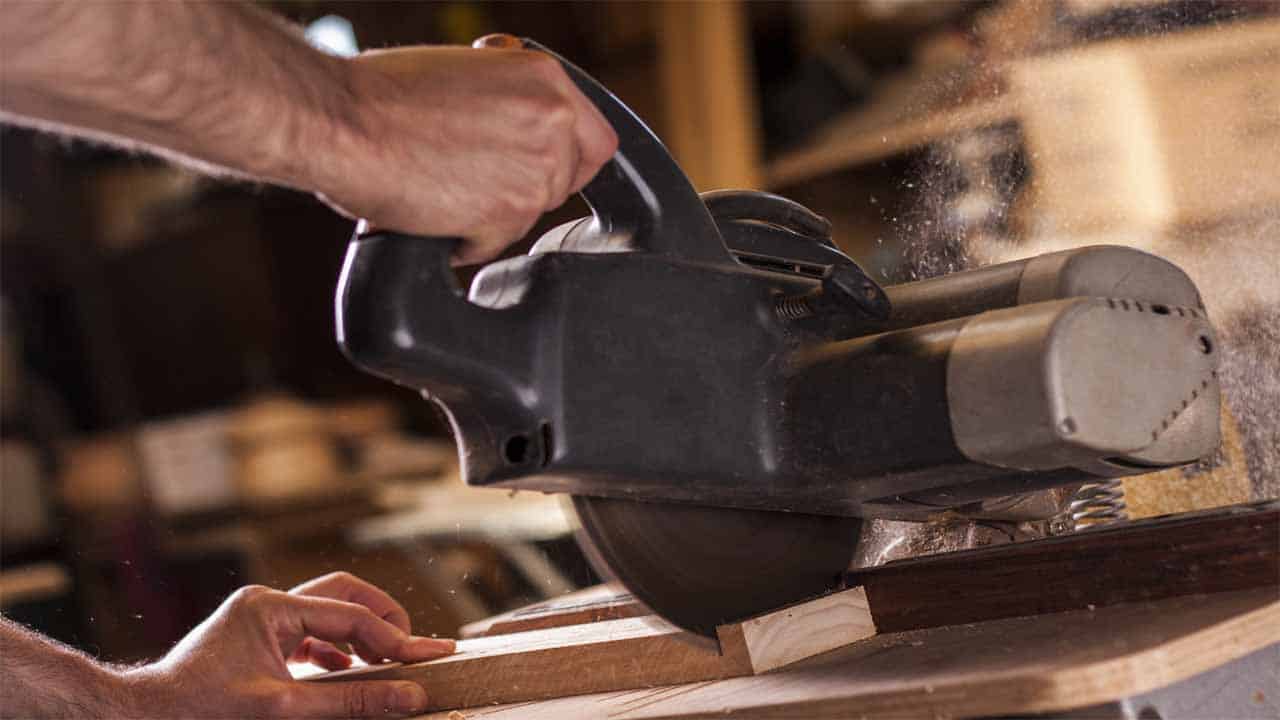 However, what the power tool lacks in terms of versatility, it more than makes up for in terms of power. The chop saw is used to cut through the thickest of wood, masonry, concrete, and even metal with relative ease.

The power tool is popular among construction workers. It is one of those power tools that are used at the beginning of construction tasks. It is used to cut big steel and lumbers into the required sizes before other power tools like the miter saw is used.

The chop saw is also popular among welders. It is used for cutting studs, trusses, and joists because of its abrasive blade.

As similar as both the chop saw and miter saw are, there are still some differences between both. Let’s check out what makes them different as well as their strengths and weaknesses.

When it comes to differentiating between power tools, especially the ones used for cutting, the blade is always a good place to start. The chop saw and the miter saw both use a circular steel blade.

The blade on both saws is designed to fit on a pivoting arm and is lowered on the material to be cut to cut top to bottom vertically. The difference comes in terms of the size variation.

The size differential is because of the power of the chop saw. The blade of the chop saw also doesn’t have any teeth unlike that of the miter saw that is packed with teeth. The chop saw has a diamond coating around its abrasive blade which makes it possible to cut without teeth.

Related Read — How to Change a Miter Saw Blade?

The Build and the Size

When it comes to the build, both saws are made from a combination of carbon steel, aluminum, and plastic. Some parts like the buttons on both saws can be made from rubber. The difference however comes in terms of size variation.

The bigger size of the chop saw means it also uses a bigger motor to rotate the blade. Though the weight of both saws depends on the model you buy, the chop saw weighs more than the miter saw.

For a power tool that can cut through thick materials like wood, the miter saw has to be very fast. But how fast is it compared to a chop saw? Not much.

The chop saw is faster than the miter saw. The larger motor in the chop saw makes it capable of generating over 5 horsepower. That may not sound much but when compared to the motor of the miter saw that generates just about 2.5 horsepower, it’s a lot.

Both power tools are used for cutting materials. The difference comes in terms of what they can cut and the type of cuts they can make.

The chop saw is limited to making just 90-degree cuts which are also known as a crosscut. The miter saw on the other hand isn’t limited to any specific cut.

The versatility of the miter saw is a result of the movement of the power tool. For instance, the blade on a single bevel miter saw can be tilted to the right or left but not both. The sliding-compound miter saw makes it possible to slide the blade forward and backward without repositioning the material to be cut.

The dual bevel miter saws make it possible to tilt the blade to both the right and left. The possibility of positioning the blade of the miter saw in just about any direction is what makes it capable of making a variety of cuts but that’s not all.

Though the chop saw isn’t as versatile as the miter saw, the chop saw is capable of making cuts on just about any material ranging from wood to metal and solid concrete.

The miter saw on the other hand is limited to wooden, composite, and plastic materials. The increased speed and bigger blade of the chop saw makes it possible for the power tool to rip through materials the miter saw wouldn’t even dare to cut.

Related Read — How to Square a Miter Saw?

Buying a brand new power tool is usually not cheap but some power tools are costlier than others. The chop saw is cheaper than the miter saw.

The chop saw’s lower price is due to its singular function. You can get a good quality chop saw for less than $200.

When working with power tools, one primary factor to consider is the safety of the user or the operator. When it comes to safety, the miter saw is better than the chop saw.

The miter saw is packed with a lot of safety provisions to prevent cuts, bruises, and kickbacks. For instance, the blade guard covers the blade of the miter saw when not in use. Most miter saws even have blade guards that cover the blade automatically when the blade is raised.

The chop saw on the other hand isn’t the safest power tool particularly in the hands of a novice. The chop saw is very powerful and the abrasive blade means it creates a lot of sparks when cutting metal. The spark created is a potential fire hazard.

How Can You Tell the Difference Between the Miter Saw and the Chop Saw?

As stated earlier, both saws look similar. You would even be forgiven if you interchange their names. However, it is important to be able to tell the difference between both tools just in case you decide to get one.

It would be a bad look on you to walk into the hardware store hoping to buy a miter saw and you end up buying a chop saw.

Though I suppose the name would be written on the container, a little bit of knowledge about both wouldn’t hurt either. So how do you tell which from which?

Another difference you would notice is that the miter saw can be tilted. The blade can be tilted to the right or left while the chop saw can’t be tilted.

You are also more likely to see a miter saw than a chop saw at the hardware store as chop saws aren’t as popular as miter saws.

Should You Get a Miter Saw or a Chop Saw?

Both saws are great individually for their specific tasks. The one you get will depend on:

If you want to cut metal, concrete, or any other tough material, the chop saw would be the best bet. Though the chop saw can also cut wood, it would be best to use it on metal.

So there you have it. If there is anything else you will like to know about either or both of the power tools, leave a comment below and I’ll respond to it as soon as possible. Have a great day.