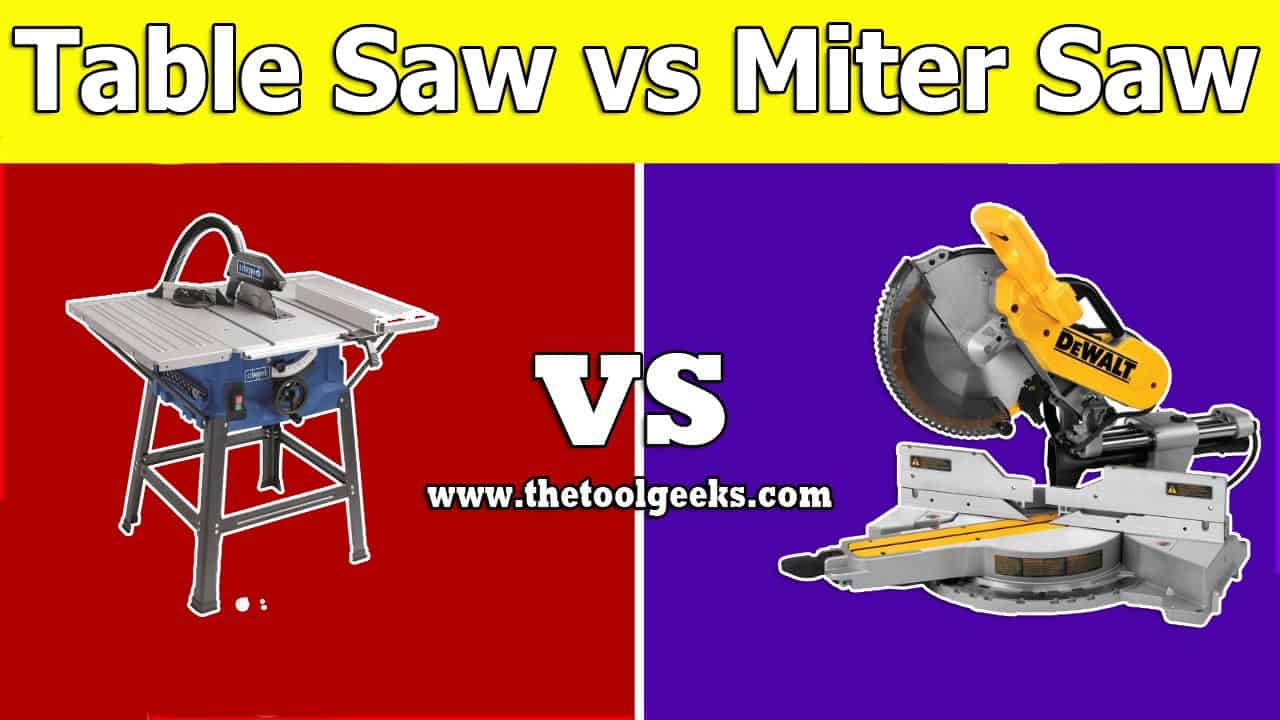 To think that you can buy a type of saw to complete all the work is a very wrong approach when you are trying to make DIY projects or professional ones. There is a reason why there are created different designs of saws and are divided into two groups such as motor-powered saws and muscled powered saws.

However, some saws have similar functions but also differ in some other ways. I cannot emphasize enough how important it is to have a basic knowledge of the saws you need to use, depending on the project and the material you are trying to cut. All these things must be considered, also the type of cut you need to make, to choose the right saw for the job.

Both miters saw and table saw are designed to cut wood. But the ways they are designed are different as well as their types of cuts. Below, we will get into much deeper details on how they are similar and where do they change.

Table saw is a horizontal and unbroken table into which there is a saw blade installed. This blade is the reason why this saw can do many kinds of cuts.

As I mentioned above, this table has a circular blade installed outside the surface of the table through a breach. The blade is movable, it can be raised or lowered. 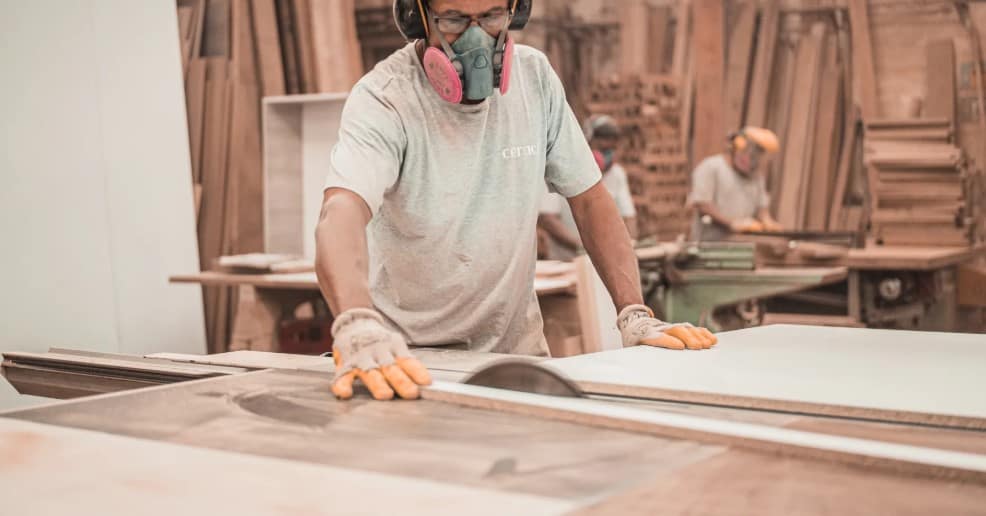 When working with wood the most used saw is the table saw, whether you are an expert in using it or just a beginner. No woodworker does not possess a table saw, its use to make many kinds of cuts have made its user own one in their workshops.

Many models have been designed for this saw. You can find them in stationary or mobile table saw at almost every hardware store.

Table saws are made for standard cuts but their true ability lies in much larger cuts. A disadvantage of these saws is that there are unable to make precise cuts. For this disability, it makes up at shining in rip cuts and crosscuts.

The one using the table saw must push the wood, placing it into the blade which is spinning vigorously at the center of the table. This blade is perfect for making 4 to 8 foot cuts whether are sheets of plywood or planks. 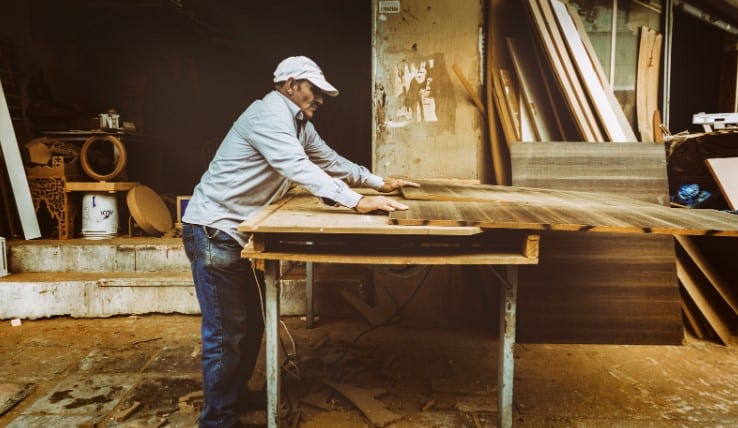 Angled cuts are harder to make with the table saw. This saw’s cuts are all dependent on the users’ ability. The user must place the wood at the needed angle and must hold it steady until the cut is completed.

Based on the thickness of the material the user can move the blade, to raise or lower. The stationary model of the table saw does not have this quality it cannot move the blade while cutting.

Size of a table saw

Few tables saw are designed with wheels so the user can move it from one space to another. The majority of the table saws are designed in a stationary model and are locked with legs of steel or are manufactured into a cabinet. This reason makes the table saws heavy, almost 300 pounds, and very hard to move.

Table saws are members of the not-so-safe group of saws. You should be a professional to use the table saw safely. The most dangerous trait of these saws is their potential to kickback.

It might happen during the cut, the blade can be blocked on the wood and when this happens it may throw back the wood or pull the users’ hands. This is why you need to have some experience using the table saw.

When to choose the table saw?

If your project includes making standard cuts, maybe cut large pieces of wood, then you must choose to use the table saw. Also if you are trying to make longer and precise rip cuts choose the table saw. It is a time server tool, it cuts quickly large amounts of wood.

Like rip cuts, a table saw can make cross cuts on shorter pieces of wood or even cut smaller sheets. What is more, carpentry or remodeling works are best done with table saws.

Table saws can do many cuts but it is harder to use and easy to make mistakes when using it. Unless you trust your abilities to use a table saw choose another saw.

Just like a table saw, a miter saw is a machine tool with a circular blade. Different from the table saw, the miter saw’s blade is installed on the arm and it can make a cut by putting it down to the material you are trying to cut. 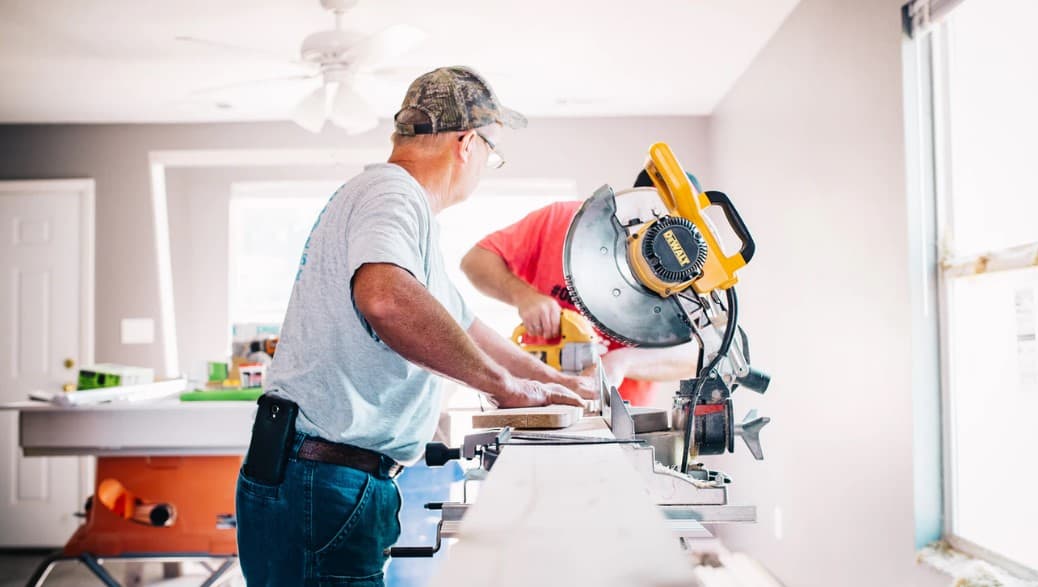 Similarly, to the table saw, this saw also uses a rotative circular blade. However, the miter saw is created for a more specific purpose as oppose to a table saw which is capable of many cuts.

Mitre saws are designed for the sole purpose to make precise crosscuts and angled cuts. Their swinging given blade can be set at any angle. This makes the precise angled cuts possible.

This model of saw gives the user more control on where to do the desired cut. Nevertheless, this saw is not as common as the table saw but yet you can find them in workshops, they are very useful.

Mitre saws take part as a motor-powered saw and its forte are precise crosscuts. Typical miter saws can make only 6 to 8 inches cross-cuts even though some of them may be more or less, depending on the model.

As you can tell a miter saw does a much smaller cut contrary to the table saw. On the other side, that is what makes the miter saw such perfect execution.

The table saw’s blade rotates in a fixed position while the miter saw’s blade has to be moved to cut. Meanwhile, when a miter saw is making an angled cut on the end of the board the head of the saw can be shifted to do a beveled cut at some the same time.

During this, a sloped edge is created instead of a flat one. Usually, these beveled cuts are used primarily in trimming because when installing trim in corners the result is a smoother adjustment.

The reason why this saw can produce such accurate cuts is that the wood is placed securely facing the back of the saw while cutting. If precise cuts are what you need then the miter is the one for it. Miter saw comes in two main designs. 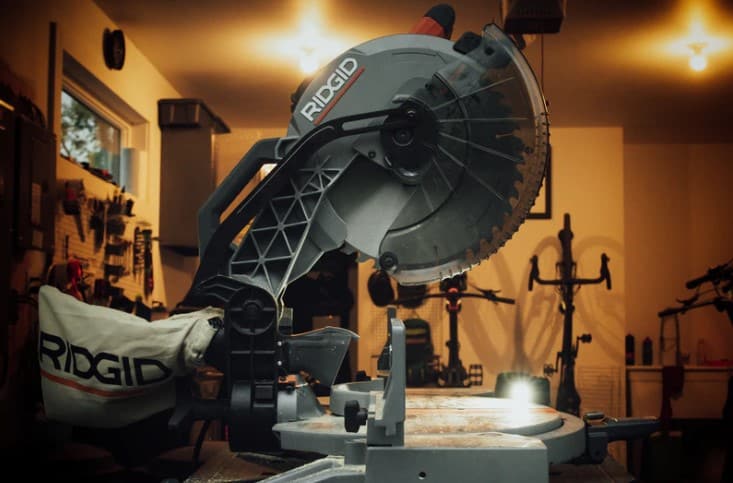 · A Compound Miter Saw – function almost the same as the basic miter saw, but they are produced with an extra option. Every miter saw can do accurate angled cuts but this model can also do beveled cuts. This model’s blade shifts and locks at the desired angle to complete the cut.

A more advanced model of the compound miter saw is also available, equipped with a blade that can be shifted in two directions with a starting point of 90 degrees.

The size of the Miter Saw

You can move a miter saw easily to different places. It is very useful for professionals for it is movable with its rotating miter.

Miter saw is produced with a blade’s width of 8 to 12 inches. Larger blades are needed when cutting wider materials such as large crown molding or siding planks.

An advantage of this miter is the sliding arm, it is produced with a handle that can go outside during the spinning of the blade so it could make longer cuts, nearly 16 inches long.

The majority of the miter saws weigh 50 to 60 pounds and can be carried at the back of the car or carried where you need it. The miter saws also can be linked in a fixed position to make it more stable.

While the table saws are dangerous tools to use unless you are a professional, the miter saw is way safer. Most injuries are caused when the person using the miter tries to change the hands.

If one hand is keeping the wood steady the other is holding the miter saw, injury happens when the user is trying to switch the position of his hands. Accidentally the user can approach the hand to close to the blade.

When to choose a Miter Saw

You know it is time to invest in a miter saw when you need precise miter or beveled cuts. It does not matter if you are trying to fix furniture or create frames or any other thing if they require precise cuts and necessary speed then a miter saw is the best.

Miter saw can be used even for more complex projects. You can make the best use of it to make precise angled cuts or reach a specific length.